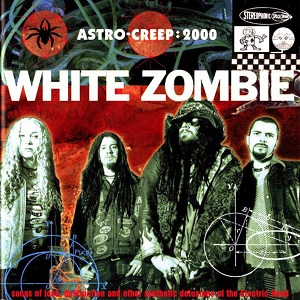 White Zombie and its figurehead Rob Zombie, are known for their love of horror movies and generous use of samples. That didn’t change on their fourth and final album. While their earlier efforts focused on their psychedelic, groove metal side, the band takes things in a darker direction here. Elements of their previous sound aren’t totally abandoned, but heavy music and disturbing lyrics take over. Not only is their new direction apparent, but Zombie’s future solo career can also be heard.

Things start off good and creepy on “Electric Head Pt 1 (The Agony).” An ominous creepy sample from the movie The Curse of Frankenstein sets the mood, followed by haunting organ music that sounds like it was made for an old black and white horror film. It amps up the unsettling vibe before the music speeds up. Afterward, everything sounds gritty and dirty, like it’s being dragged through the mud. It still has a really great to mood to, similar to their earlier songs. It’s a great way to start the record and serves as a reminder why the band were so unique.

“Super Charger Heaven” speeds things up with the rapid, raw music full of energy. Rob Zombie sounds downright evil as he spits lyrics like “Yeah inbreed the witches /and worship the dogs/Deformed and fuck’n lazy/Damn yourself and choke” and that’s only the beginning of the supernatural references. There’s even some unsettling chanting by the end that completes the horrific feel. Zombie really shows off his witty, visual side with the lyrics painting weird and odd images. “Creature of the Wheel” comes off really slow and heavy. Everything sounds de-tuned, even Zombie’s vocals as he sings in almost a growl. The whole things comes off really dirty and rough. The use of samples here is no different than the others, except that it’s unnerving. Something about the way the crowd drones “Nooo” when asked “does he have the marks?” gets under your skin.

“Electric Head Pt 2 (Ecstasy)” is punchier than its counterpart. The music here is energetic and even has a hint of their previous funk/groove infused sound. As soon as you hear it, you can’t help but start moving. Zombie’s future solo career comes through the most on this track. Everything from the opening line “I just say up yours, baby” to the pace of the music, and even the way he sings “Yeeeaah” is reminiscent of what he would do later on. Still, it manages to be catchy and is one of their best songs. “I Zombie” isn’t hard to remember thanks to the constant use of the line “I Zombie.” The track deceives the listener into a peaceful mood with a choir harmonizing until it’s interrupted by a blood curdling scream. It’s aggressive and comes right at you without stopping. It delves right back into their psychedelic realm making this one trippy ass ride for the listener.

Hands down the best track on the album is “More Human than Human.” The song just kick ass, plain and simple. It finds the band using a bit of electronic for the throbbing riff that opens the song. The peeling guitar then shreds through fierce and is on fire. Zombie gets creative with the lyrics making up words like “psycholic” to describe this creature. There’s even a line that mentions “love American style,” which may be a reference to the show of the same name. Everything about it is awesome and really catchy. The oddly titled “Grease Paint and Monkey Brain” starts off sounding demented before the music slows down into a trance like state. This is probably the heaviest song on the record, which makes it a bit too slow at times. Still, the lyrics that equate death with a fucked up version of Las Vegas keeps your attention all the way through.

White Zombie were one of the most exciting, crazy, freaked out, and creative metal bands of the 90s. Though they disbanded right when they were hitting their stride, they at least went out with a bang on this LP. It left fans with some kick ass hits and gave Rob Zombie the basis for his successful solo career, which he’s still finding time for today when he’s not directing questionable horror movies. The music is heavy, the lyrics are creepy, and as always with White Zombie, there’s a bit of a groove to get your ass moving. It’s a great farewell from an awesome band.