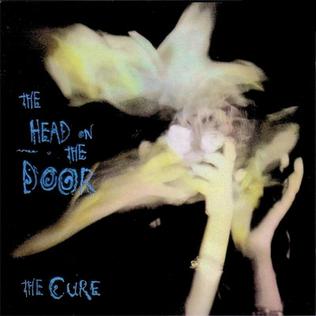 It’s easy to label The Cure as a bunch of gloomy Brits, especially when looking at their first three albums. But there’s more to them than their doom laden appearance suggests. There are many sides to The Cure from the dark and terrible to the upbeat and downright silly that fans have come to love over the years. They’ve developed a knack for blending pop sensibilities with dreary topics, which they explored on the psychedelic album, The Top. It wouldn’t be until 1985’s The Head On the Door where they’d perfect their mix pop and gloom.

“Inbetween Days” starts things off on a happy note. The music is upbeat, bright, and downright giddy. It makes you want to get up and hop around. It seems like Robert Smith’s in a good mood until he sings “yesterday I got so old/I felt like I could die” expressing his fears of getting older. It may not be as depressing as past albums, but it’s clear that darkness is still there. This song perfectly blends both sides of the band. The pop music makes its catchy and appealing, but the lyrics bring on that gloominess The Cure is often known for.

We dive further into the black with “Kyoto Song.” This enigmatic track could easily fit on Pornography with its bleak lyrics, creepy images, and haunting sound. It’s soft, quiet, and gentle like a lullaby, but the plinking keys and Smith’s morbid lyrics give it a cold feeling. Things get chilling as he sings “A nightmare of you/of death in the pool/wakes me at quarter to three.” Smith continues to describe a horrifying nightmare that gets worse as the song goes on. It’s an oddly beautiful track that captures the disturbing and haunting side of the band.

“The Blood” picks things up again with its flamenco inspired guitar riff and hypnotizing melody. The story goes the song is about the time Smith knocked back a drink called Tears of Christ and got so wasted he mumbled the opening line of the chorus. It’s an underrated track that finds The Cure continuing to explore their sound. The Latin inspired music gives it an exotic and seductive groove. It’s a weird, yet catchy entry in the band’s catalog that doesn’t receive enough appreciation.

Shifting between sounds and moods is a big theme for the album. Surprisingly, it works never sounding disjointed or jarring. The upbeat opener pulls you in with a false sense of happiness, but it quickly moves to dark waters. We move between songs that are light and bubbly, songs that are melancholy and even songs that are sensual. On “Six Different Ways” The Cure is playful with the light, bouncy music sounding like nothing else on the LP. The twirling ocarina, the brighter music, and Smith’s quirky vocals give it a whimsical and childlike quality.

Things shift again when we get to the trippy “Screw.” With the surreal lyrics and odd music, it represents The Cure’s psychedelic side, which was out in full on their previous album. But we get back to melancholy on “A Night Like This,” which is the perfect blend of pop and gloom. Smith broods as he pleads for his lover to stay. The music brightens up a bit during the bridge when the horns come in for an unexpected solo. Smith’s tongue in cheek nature is loud and clear with snarky lines like “you’re just the most gorgeously/stupid thing/I ever caught in the world” making this song bittersweet.

On this album, The Cure craft ten songs of near pop-gloom perfection. Though some of the tracks aren’t as strong or catchy as others, there’s never a dull moment on the record. It’s here you’ll find some of their most endearing singles like “Close to Me,” which is quintessential Cure. It’s airy, upbeat, and catchy with a slight sensual air. It’s even a bit creepy with Smith’s heavy breathing at the start. There’s also gems like “The Baby Screams” another catchy song highlighted by Smith’s beastly guitar riffs and his howling vocals. Though it’s another upbeat track, Smith’s frustration and anger with life ring loud and clear. This feeling returns on the anthemic “Push.” The extended intro, which would return in full on Disintegration, along with Smith’s echoing guitar builds up anticipation that finally breaks with Smith’s demand of “Go! Go! Go!/Push him away!”

The album ends with the melancholy “Sinking.” Starting with clashing piano keys, the music is soft and soothing luring you into this state of calm. Everything sounds peaceful until Smith starts singing and his fears about getting older rear their ugly head: “I am slowing down/As the years go by/I am sinking/So I trick myself/Like everybody else.” Suddenly, the mood shifts from calm to dreary, even anxious. With echoes of Disintegration, it’s a stellar song closing the album on a sad note showing that Smith’s darkness is never far from him.

The Head on the Door is a stellar album that expertly mixes The Cure’s pop sensibilities with their bleak outlook. They took the experimentation they started on The Top and pushed it further, exploring different moods and soundscapes throughout the record. We see many different sides of The Cure here along with sonic staples that would appear on later albums. This album doesn’t get enough credit since it’s overshadowed by the behemoth that is Disintegration. It may not be their greatest album, but it’s one that helped shape The Cure sound we know and love today.